In Her Story (1988-1990), Murray collaborated with acclaimed American performance-poet Anne Waldman (born 1945) to create a highly personal and consciously feminine reaction to modern life. Murray's engaging color prints, which may at first glance seem like abstract compositions, are actually amalgams of recognizable subject matter--cups and saucers, chairs, paint brushes, and human figures--that she uses as starting points for her visual and emotional explorations of her environment.
(https://collections.artsmia.org/art/61859/her-story-elizabeth-murray) 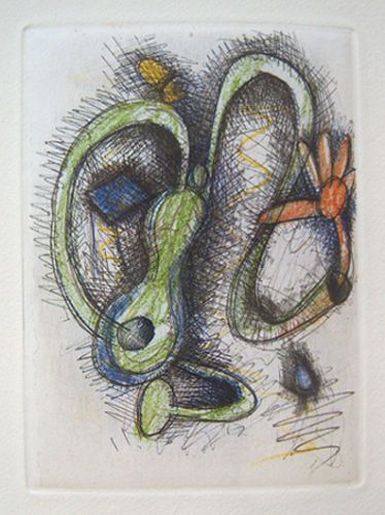 Objects placed
toward the noisiest door
ritual of day
open blind, wake the one
she comes now
although hesitating
2 minutes longer
Then he's gone
She thought he
might be a catch
before he was
to be useful
distraction:
trowel, eyeglasses
a sudden play of legs
He's here to make a baby 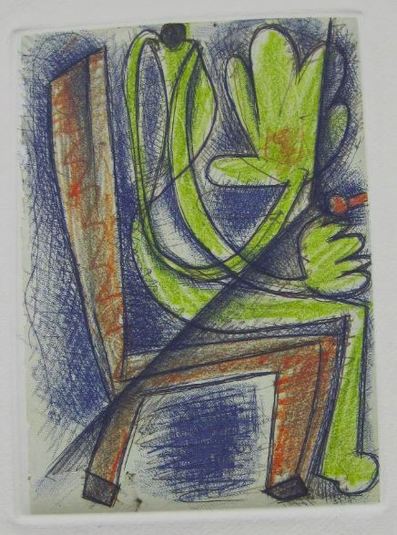 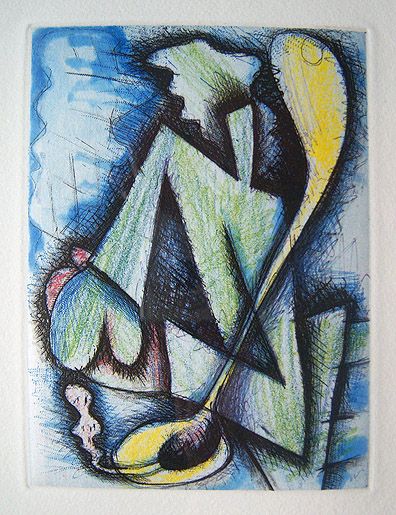 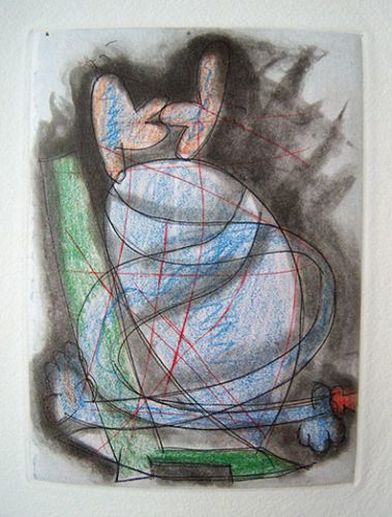 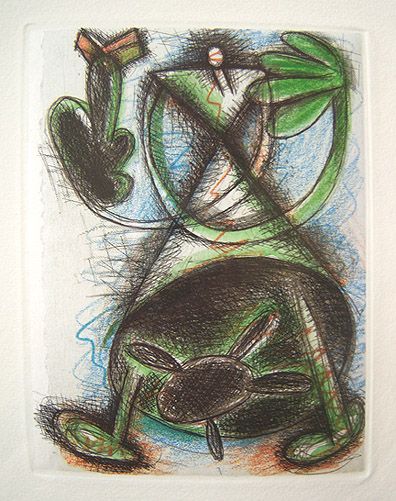 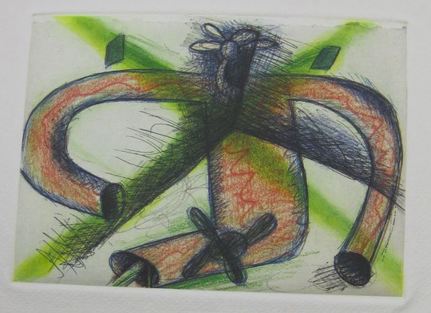 ​Unsteady at the window
Reflection a legend
she observed
Her hair a nest of
currents
Safety of a door, a
long corridor, walk,
What's next? 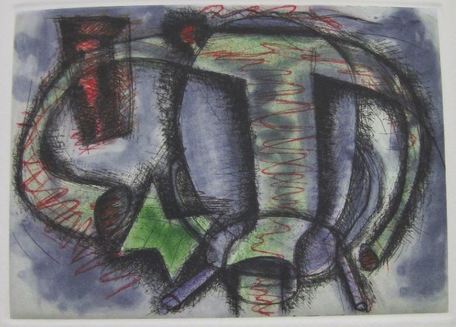 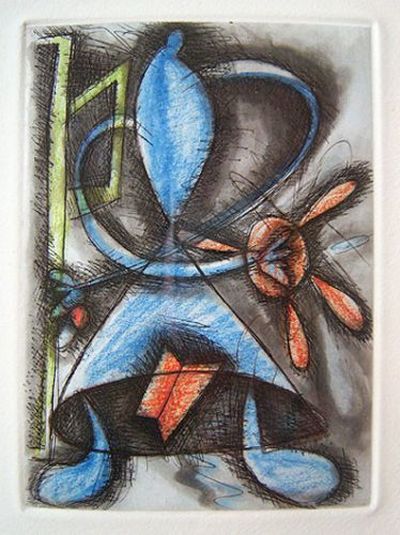 The man makes me nervous
He sees inside me
like an x-ray
Balloons come out
of my head
like bubbles
as if drowned
This one says "Gulp"
This one says "Whew"
I'm in his cartoon
each morning
Night: lock the door 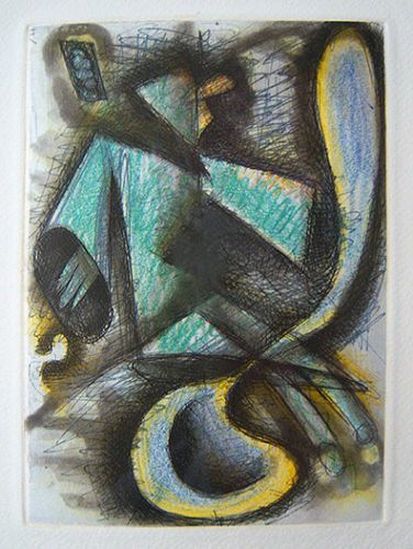 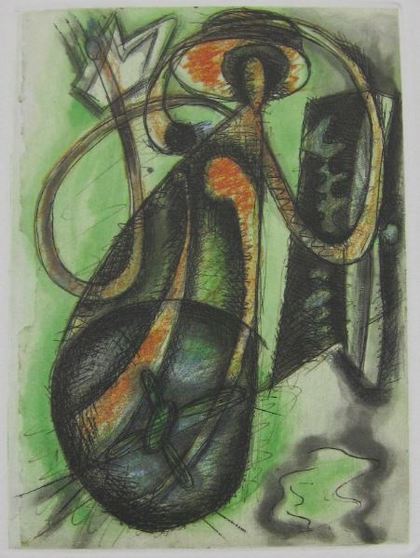 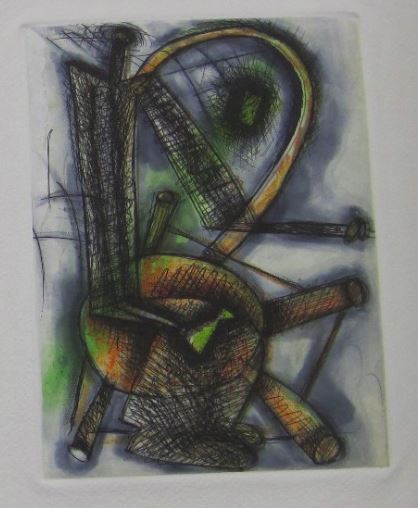 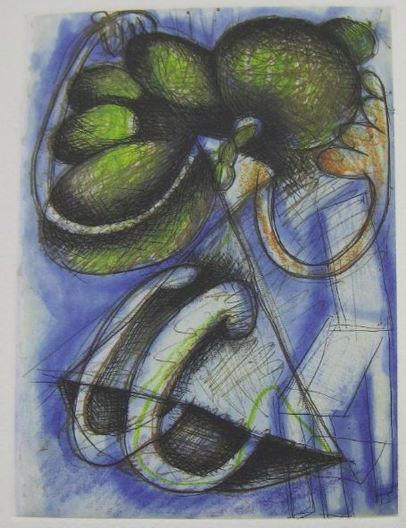 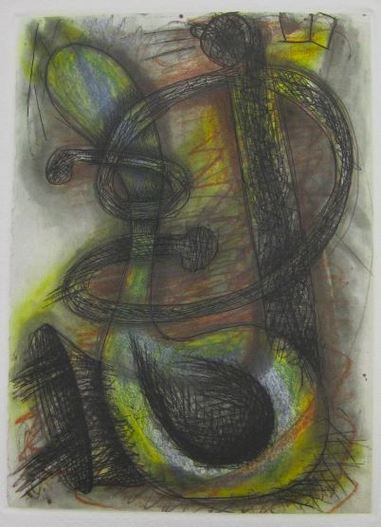 →  Like her oil paintings, Murray's prints are vividly colored, exuberantly decorative, and strongly sculptural in feeling. And while her images reveal an obvious penchant for elaborate geometric arrangements of form and color, it is Murray's emotional reaction to the world and its physicality that lies at the heart of her work and lends it such a potent vitality.
​              (https://collections.artsmia.org/art/61859/her-story-elizabeth-murray)

→ In Her Story, Murray’s drawings are cellular, mutating, nuclear, nucleus, openings around liquid matter where small intersections of shapes are floating... bodies in the process of being formed, something between animation and machine, between organic and synthetic, between anemone, monster, and human.

→ The act of imagining a space entails that the writer actually go in and interpret what the artist is trying to do — revealing the parts while simultaneously seeing the whole. In Her Story, Waldman looks very closely at what Murray is doing and then finds a form for it in language. She describes her reading of Murray’s work: “The drawings are coils, bursts of energy, fantastically witty, like cartoons gone awry yet made elegant in their transformation. She seems located in ‘things,’ but what are they?” (Vow, 324) Here Waldman is looking at the artwork in a particular way in order to find a point of intersection where she can find her own form in language.
To do this, Waldman inserts a “she” who is finding her form in the floating shapes. This “she” must first disconnect herself from a “he” who is also claiming the territory. Waldman describes the narrative of Her Story as “a narrative logic. It embeds being female, being pregnant, being in a kind of humorous, hormonal situation vis-à-vis the world, the ‘male.’ It’s a contest, a struggle. Her drawings suggested a story, not necessarily hers or mine but the story of a state of mind taking shape” (Vow, 325-6). In order to find this evolving mind, Waldman had to actually enter the space of the artwork and find its logic. This is exactly what the “she” is doing in the poem — wandering through a territory where maps have gone awry, navigating a maze of corners and loops, making (marking) her way through.

→ ​ The seventh of Murray’s drawings in the sequence has two discernible shapes that have broken away from each other — one is floating in the sky, the other is cascading across the ground — each is in its own form that makes sense where it is in space. Waldman, in her corresponding poem, has wrestled the tubular amoebas and has found her way through the tangle of primal mess — those strings and quarks that keep it all together. Seeing herself in the context of a larger world, Waldman looks into Murray’s drawings and sees an individual body being held together by a larger, unstructured universe.