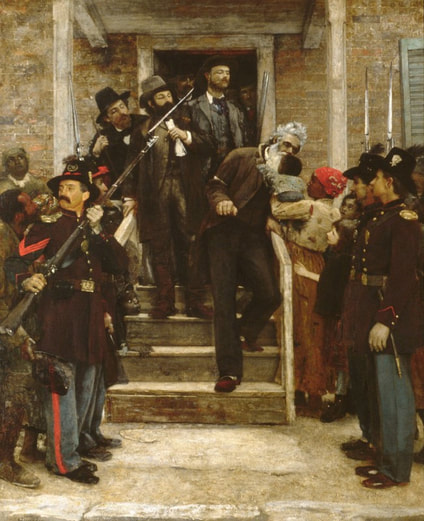 Thomas Hovenden, The Last Moments of John Brown, The Metropolitan Museum of Art, http://www.metmuseum.org/art/collection/search/11160
TWO POEMS
Lydia Maria Child, a writer, abolitionist, and social activist, composed "The Hero's Heart" for an American Anti-Slavery Society program in Boston on January 26, 1860. It was reprinted in various publications shortly after. John Greenleaf Whittier's “Brown of Ossawatomie” was written a month earlier, in December 1859, the month of the execution (which was on December 2nd).

[When John Brown went from the jail to the gallows, in Charlestown,
Virginia, December 3, 1859, he stooped to kiss a little colored child.]

A winter sunshine, still and bright,
The Blue Hills bathed with golden light,
And earth was smiling to the sky,
When calmly he went forth to die.

But Jesus smiled that sight to see,
And said, "He did it unto me."
The golden harps then sweetly rung,
And this the song the angels sung:

So vainly shall Virginia set her battle
in array;
In vain her trampling squadrons knead
the winter snow with clay.
She may strike the pouncing eagle, but                            [45]
she dares not harm the dove;
And every gate she bars to Hate shall
open wide to Love!
Discussion points / questions / activities
"John Greenleaf Whittier’s “Brown of Ossawatomie” was probably the most famous and widely-reprinted John Brown poem.  This poem, published in December 1859, attempts to reconcile Brown’s violence at Harpers Ferry with Whittier’s own Quaker pacifism, one that opposed violence over the slavery issue and sought to solve the conflict through spiritual reform.  Like many other Americans opposed to slavery and who did not share his pacifist beliefs, Whittier realized  that his political position was becoming untenable.  Thus in reading accounts of Brown’s execution, Whittier seized upon a false report by New York Tribune journalist Henry Olcott, published on December 5, 1859.  That report concerned an imagined kiss given to a black child by John Brown on his way to execution.  In this poem, the exchange of this kiss transforms Brown’s violence into a new Christian redemption flowing from the power of love.  Whittier so refigures Brown from fighter to saint: “That kiss from all its guilty means re- / deemed the good intent, / And round the grisly fighter's hair / the martyr's aureole bent!” (lines 21-24) Lydia Maria Child’s "The Hero's Heart" employed the same fictitious report to characterize Brown’s death, although without the same emphasis on pacifism.
"An earlier critic such as Cecil D. Eby found Whittier's poem “an unforgivable outrage upon [historical truth]" and asserted that it produced enormous social harm not only for misrepresentation but because it “agitated a nation already hovering precariously upon the brink of war.” (Eby, “Whittier’s Brown of Ossawatomie,” New England Quarterly 33 (Dec. 1960). In a contemporary reading, Zoe Trodd locates this poem within attempts to revise...an understanding of Brown’s rebellion, common among African Americans, as self-defense.  The poem, she argues, constitutes an initial instance of many subsequent cultural attempts to gentle Brown’s legacy, denature the historical events, and avoid confronting the social implications of Brown’s violence." (Joe Lockard)

Both poems can also be found here:  http://antislavery.eserver.org/poetry/john-brown-poetry​
Powered by