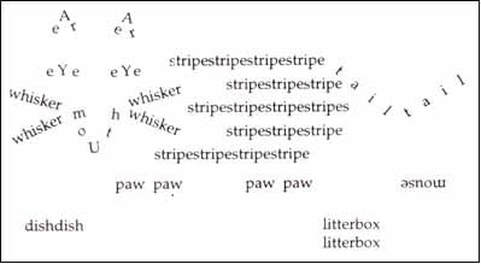 'Concrete Cat,' by Dorthi Charles (for this poem, the pen-name of X.J. Kennedy)
​Baker, Karen, Dorothy Mintzlaff Kennedy, and X. J Kennedy. Knock at a Star: A Child’s Introduction to Poetry. Boston: Little, Brown, 1999. Print.
Discussion points / questions / activities (many taken from a book by Joseph T. Thomas, Poetry’s Playground: The Culture of Contemporary American Children’s Poetry. Wayne State University Press, 2007. Print.)
​
1. What does the writer indicate by capitalizing the a in ear? The y in eye? The u in mouth? By using spaces between the letters in the word tail?
2. Why is the word mouse upside down?
3. What possible pun might be seen in the cat's middle stripe?
4. What is the tone of "Concrete Cat"? How is it made evident?
5. Do these words seem chosen for their connotations or only for their denotations?
6. Would you call "Concrete Cat" a poem?

(these six questions were adapted from Perrine's Sound and Sense, ed. Arp, and Kennedy, X. J, and Dana Gioia. Literature: An Introduction to Fiction, Poetry, Drama, and Writing.Pearson, 2016. Print.)

→ "Unlike conventional poems, Kennedy's cat implies no speaker and so lacks the spoken, aural dimension that is so common in mainstream poetry. In fact, Kennedy resists the conventional wisdom entrenched in mainstream U.S. poetry since the 1950s--that poems must be representational. As Jed Rasula writes of U.S. mid-century poetry in American Poetry Wax Museum, 'Poetry was emphatically and resolutely taken to be an art of reference and representation; an art of depiction and assertion. Furthermore, what was asserted in the poem was the articulated intentionality of 'the speaker,' a figure of sensibility, perceptual resourcefulness, and determinate contours.' 'Concrete Cat' implies no such speaker, sensible or otherwise"  (98)

→ "Is this poem a pictographic definition of a cat? Does it really look like a cat, or is the resemblance as culturally overdetermined as that between a smiley face " : ) " and a human face? 'Concrete Cat' acts as the arbitrary link between sign and signifier, poking fun at those who believe that 'words...are transparent: they allow us to see through to the thing itself' (William and Betty Greenway, "Meeting the Muse: Teaching Contemporary Poetry by Teaching Poetry Writing" in Children's Literature Association Quarterly). 'Concrete Cat' seems to ask us, 'does 'eAr' look like an ear? Or "whisker" look like a whisker? (p. 99)

→ According to Kennedy, he wrote "Concrete Cat" as an attempt to represent "the sillier kind of concrete poem that simply and unfeelingly arranges words like Lincoln Logs" (p. 98). Do you think it's true that "Concrete Cat" is just silly? Or is there a deeper meaning or message somehow?

→ "Although the form of 'Concrete Cat' would seem to preclude a narrative from being told, it nonetheless does tell a story of sorts, and a scatological one at that...The story is unconventionally expressed, but it is certainly there: a cat has eaten, or perhaps merely killed,a little mouse. High drama, indeed. But the story has enough holes, enough gaps, to remain ambiguous, open, and thus asks readers to fill in the blanks: why is the dead mouse near the litter box? Did the cat eat the mouse and defecate it? If so, why isn't it in the litter box? It appears this concrete cat is not a tame cat..."  (99)

→ "With traditional, rectilinear poems, readers usually conform to overdetermined reading habits; with "Concrete Cat," we try to take the entire picture in at once, and, finding this impossible, have freer rein to travel around the poem's surface in improvisational acts, to create meaning in ways not rigidly ordained by the writer (p. 99)